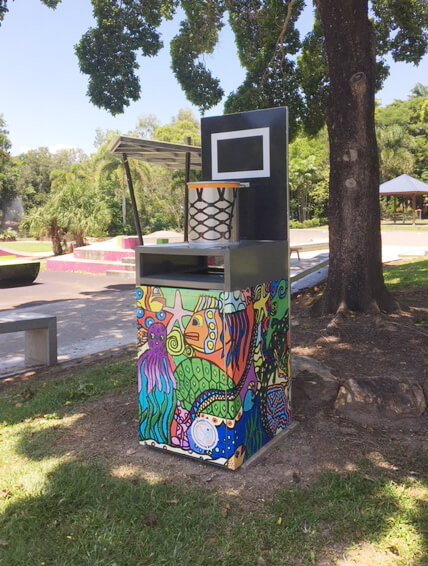 Josh Royle collects rubbish at the skate park every week and he is the face of Plastic is Drastic – a one-man litter squad targeting waste.

Earlier this year Josh pitched the idea of having “bin-hoops” at the park to Cairns Regional Council. The bin-hoops are a basketball hoop attached to the top of a standard bin. Park users can slam-dunk their rubbish rather than drop it on the ground.

Divisional Councillor Brett Olds said Council was happy to back the project which also involved art students at Trinity Beach State School designing a colourful mural wrap for the bin.

“Josh started his project last year as part of the Holloways Beach Environmental Centre’s Enrichment Program and he approached me to see if Council could help him with his efforts regarding the rubbish problem at Coastwatcher’s Skate Park,” Cr Olds said.

“The result has been fantastic. Students from the Trinity Beach State School advanced art program completed a mural on the bin, so not only will the bin encourage kids to dispose of their rubbish properly, but it will showcase the talents of these young artists as well.”

Josh said his war against litter was part of a larger campaign to protect the environment and Great Barrier Reef.

“I have been doing clean-ups at Coastwatcher Park on a weekly basis and in every clean-up I have been picking up over 100 pieces of plastic,” Josh said. “We have picked up a fire hydrant, crates and also the slushie cups.”

“I focus mainly on this area because it goes straight down to the creek and leads down to our waterways and oceans and harms the marine life. The plastic bags can get stuck in turtle’s bodies and the straws can go up their noses.”